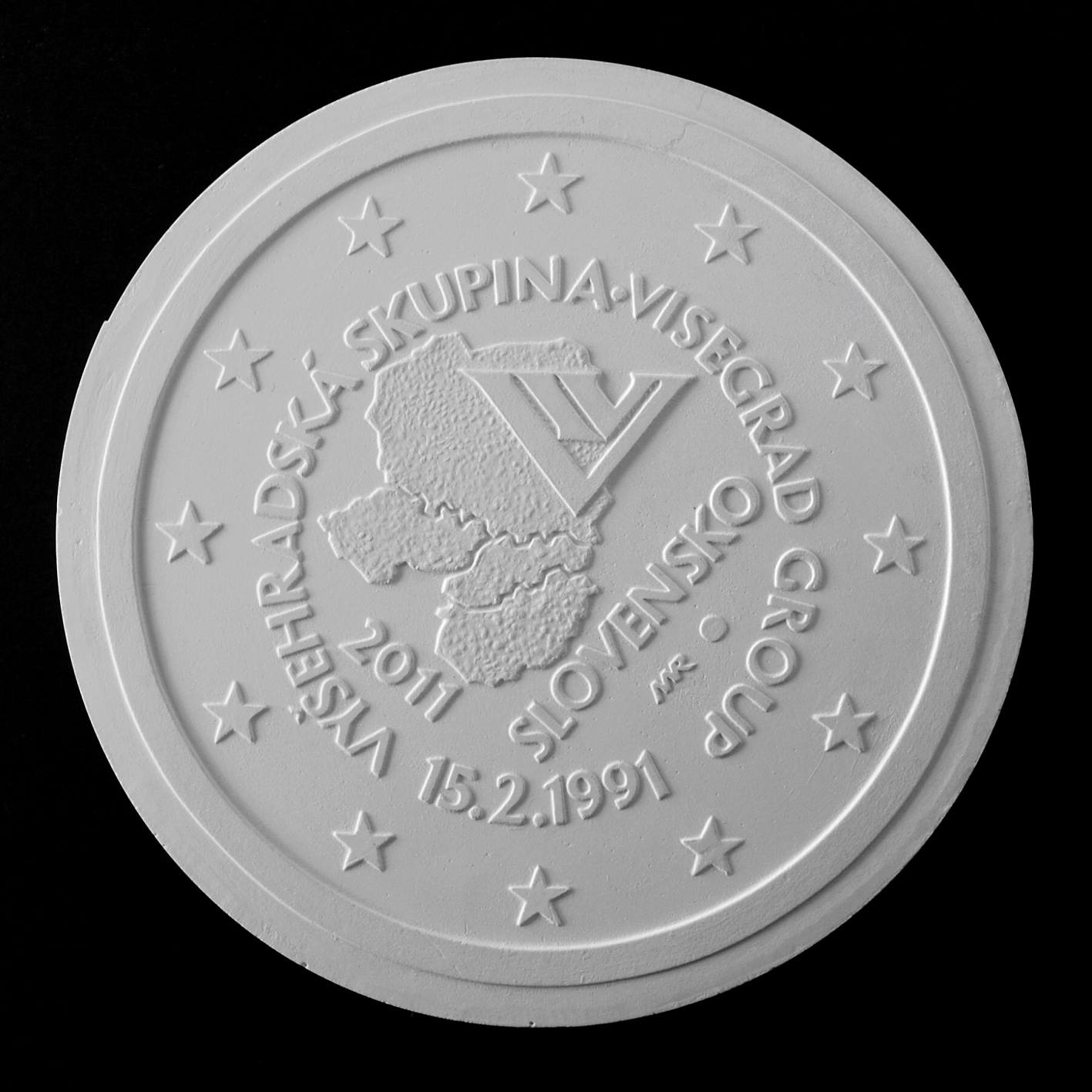 In March 2010, the Národná banka Slovenska announced a public anonymous competition for the art design of a commemorative coin in nominal value of 2 euro commemorating the 20<SUP>th</SUP> anniversary of the Visegrad Group's formation. This regional alliance comprising four countries - the Slovak Republic, the Czech Republic, Hungary and Poland - was created with the aim of deepening relations and mutual cooperation between these four Central European countries. The commemorative coin will have the same parameters as the ordinary circulation 2 euro coin, it is intended for circulation and will be legal tender in all Euro area countries.
Seventeen artists submitted a total of 30 designs for the national side of the coin to the competition. The NBS Governor's Commission for the Assessment of Art Designs of Slovak Euro Coins assesed all submissions in May 2010.
Approved for realization was the design of creative artist Miroslav Rónai, who received the reduced first prize. The commission, as well as its professional advisors, representatives of the Ministry of Foreign Affairs of the Slovak Republic, unanimously agreed that the symbolism used in this design most comprehensibly represents the Visegrad Group. As the main theme, the author selected a map of the involved countries. He supplemented this with an interestingly formed graphical symbol consisting of the letter V, into which is inserted the number IV. The design is notable for its balanced composition and quality of workmanship. The commission recommended that the author modified only one small detail of the winning design - the elimination of the four leaf clover symbol, which had been placed under the Slovakia inscription.
Miroslav Rónai also received the reduced second prize in the competition. His other design attracted the commission with its inventive utilization of symbols - stylized flags of the four countries, and a tree as the generally comprehensible symbol of common roots, growth and development. An indication of the letter V and the number IV are also included in the composition.
The reduced third prize was awarded to Mgr. art. Patrik Kovačovský. His design captivated the commission with its interesting graphical solution, consisting of a tiling puzzle of four elements with the names of the capital cities of the Visegrad Group countries.
The recommendation of the professional commission for the realization of the commemorative coin and for the prize awards was approved by the Governor of NBS by his decision in June 2010. The planned date of issue is January 2011.
Zum Vergrößern anklicken....

Bilder der anderen Entwürfe und Informationen auf:
Results of the Public Anonymous Competition for the Art Design of a Commemorative Coin in Nominal Value of 2 Euro commemorating the 20th anniversary of the Visegrad Group?s Formation - www.nbs.sk