Eesti Pank announces a competition to design a two-euro commemorative coin
27.12.2016
Keywords:
circulating coin with the special design
competition
cash
Eesti Pank is announcing a competition to design a two-euro commemorative coin “Estonia’s road to independence” dedicated to the events that preceded Estonia’s independence. The coin will mark the approaching 100th anniversary of the Republic of Estonia and will enter into circulation at the start of the second half of 2017. Both individuals and groups of authors are welcome to participate in the design competition.

The 100th anniversary of the Republic of Estonia falls in 2018. But the state was not founded in a single day. Estonia gained autonomy after the February Revolution in Russia in 1917 when the province of Estonia was established. On 1 July 1917 the first representative parliament of the Estonian people, known as Maapäev, assembled. It declared itself the highest organ of power in Estonia on 15 November 1917. It was a big step towards statehood. To mark the events that preceded the declaration of independence, Eesti Pank will issue a two-euro commemorative coin “Estonia’s road to independence”.

A two-euro commemorative coin is a circulating coin with the usual common side and a special commemorative design on the national side. Elements that must be included in designs submitted to the competition for the national side of the coin are the words “Eesti” and the year 2017. The design should also use the circle of twelve stars around the whole national part of the design. The twelve stars must appear as they do on the standard two-euro circulation coin.

The detailed rules for the competition and procedures of the judging panel for the design of the two-euro commemorative coin “Estonia’s road to independence”.

The deadline for the submission of correctly formatted designs is 31 January 2017 at 12.00. Designs with a one-word title should be sent in a sealed envelope to Eesti Pank by the deadline to: Mündižürii, Eesti Pank, Estonia pst 13, 15095 Tallinn.

Eesti Pank will announce the results of the competition by 31 March 2017 at the latest. Once the coin is released, the winning designer will receive a prize of 2000 euros.

The coin will enter into circulation at the start of the second half of 2017.

Eesti Pank is happy to receive suggestion for collector or commemorative coins by post or email or through its website. The bank passes all the suggestions it receives to the advisory committee for analysis and expert opinion. The proposals of the advisory committee are used by the management of Eesti Pank when they decide on which commemorative and collector coins to issue. 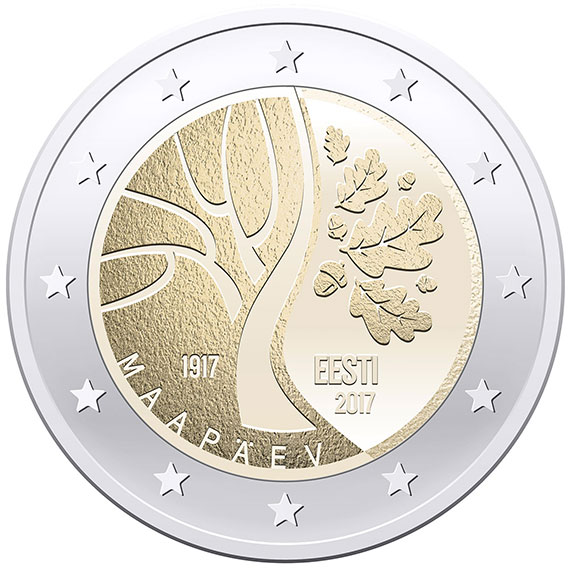