Commemorative ‘Nature and Environment’ €2 Issued
The Central Bank of Malta is issuing the fourth €2 commemorative coin under the ‘From Children in Solidarity’ programme, which gave schoolchildren the chance to design a coin.

The theme of this year’s winning coin design is ‘Nature and Environment’, following on from coins illustrating ‘solidarity through love’, ‘peace’ and ‘cultural heritage’.

Joshua Stuart, a student of the Maria Regina College in Naxxar, opted for a simple stylised representation of the sun and a fruit tree. The coin has as its central theme the sun’s benevolent action, which provides warmth and light, and enables trees and vegetation to grow and bear fruit. The coin was engraved by Noel Galea Bason.

These commemorative coins will be produced in circulation quality and will be issued in rolls of 25 coins each as well as in coin cards.

The ‘From Children in Solidarity’ coin programme was officially launched in 2015 by the Central Bank of Malta, in collaboration with the Ministry of Education and the Malta Community Chest Fund Foundation.

Profits from the sale of the coin cards will be channelled in aid of the Malta Community Chest Fund Foundation. In 2019, €50,000 was presented to H.E. President of Malta George Vella, representing the profits from the coin released in 2018. 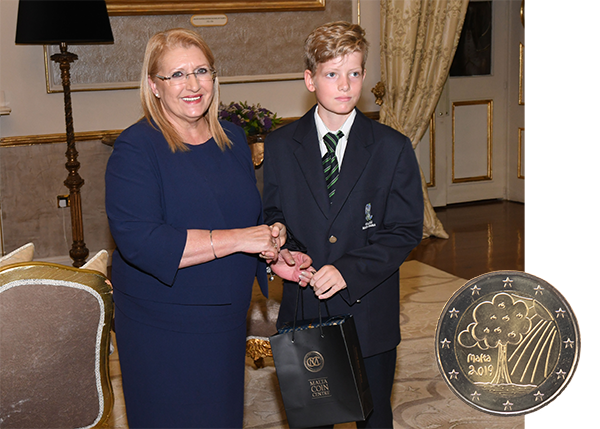 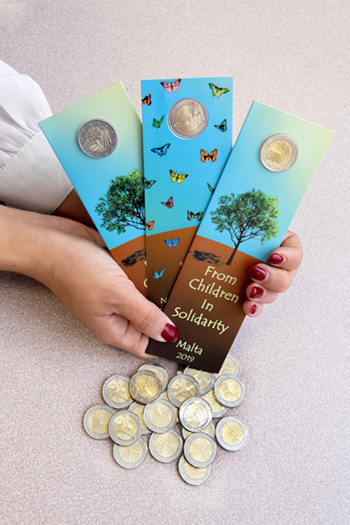 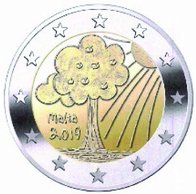 The Central Bank of Malta has reiterated its commitment to the community by making a fourth consecutive yearly donation to the Malta Community Chest Fund Foundation (MCCFF).

The sum of nearly €50,000 was presented to H.E. George Vella, President of Malta, during a courtesy visit at Sant'Anton Palace by staff from the Malta Coin Centre, which is responsible for the Bank's numismatic issues.

The amount represents the profit from the sale of coin cards containing the €2 commemorative coin dedicated to the twin themes of nature and environment.

The commemorative €2 coin is the fourth in the From Children in Solidarity series issued by the Central Bank of Malta. The coin was designed by students through a competition open to all secondary students, with the winning designs selected by an expert panel. The fifth, and last, coin in the series - on the theme of games - will be issued later on this year.

The President of Malta welcomed the donation and said: "The Bank's donation strengthens the mission of the Malta Community Chest Fund Foundation which requires a great deal of funds to meet the numerous demands that it receives daily for help from several people, but at the same time this has been an excellent opportunity for children to express their ideas about current issues through creativity and art."