On 15 March 2019 the Central Bank of Malta will issue numismatic coins in gold and silver depicting the Order of St John's Gran Carracca Sant'Anna. The coins are issued under the Europa Programme with the theme 'Renaissance' and bear the Europa Star logo.

The coins were designed and engraved by Noel Galea Bason, and were minted at the Royal Dutch Mint. The obverse of the coin features the coat of arms of Malta and the Europa Star logo. The reverse of the coins depicts the Gran Carracca Sant'Anna, a warship renowned for its large size and prodigious firepower.

The carrack was one of the most influential ship designs of the Renaissance. Of robust construction and combining speed with manoeuvrability, carracks could serve as both merchant ships and warships. The Order of St John's carrack Sant' Anna, was launched in December 1522, at about the same time that the knights lost Rhodes. This ship, the pride of the Order's navy, carried Grand Master Philippe Villiers de L'Isle Adam to Malta in 1530. This event marked the start of the Order's long sojourn on the island and the start of a new epoch in Maltese history. 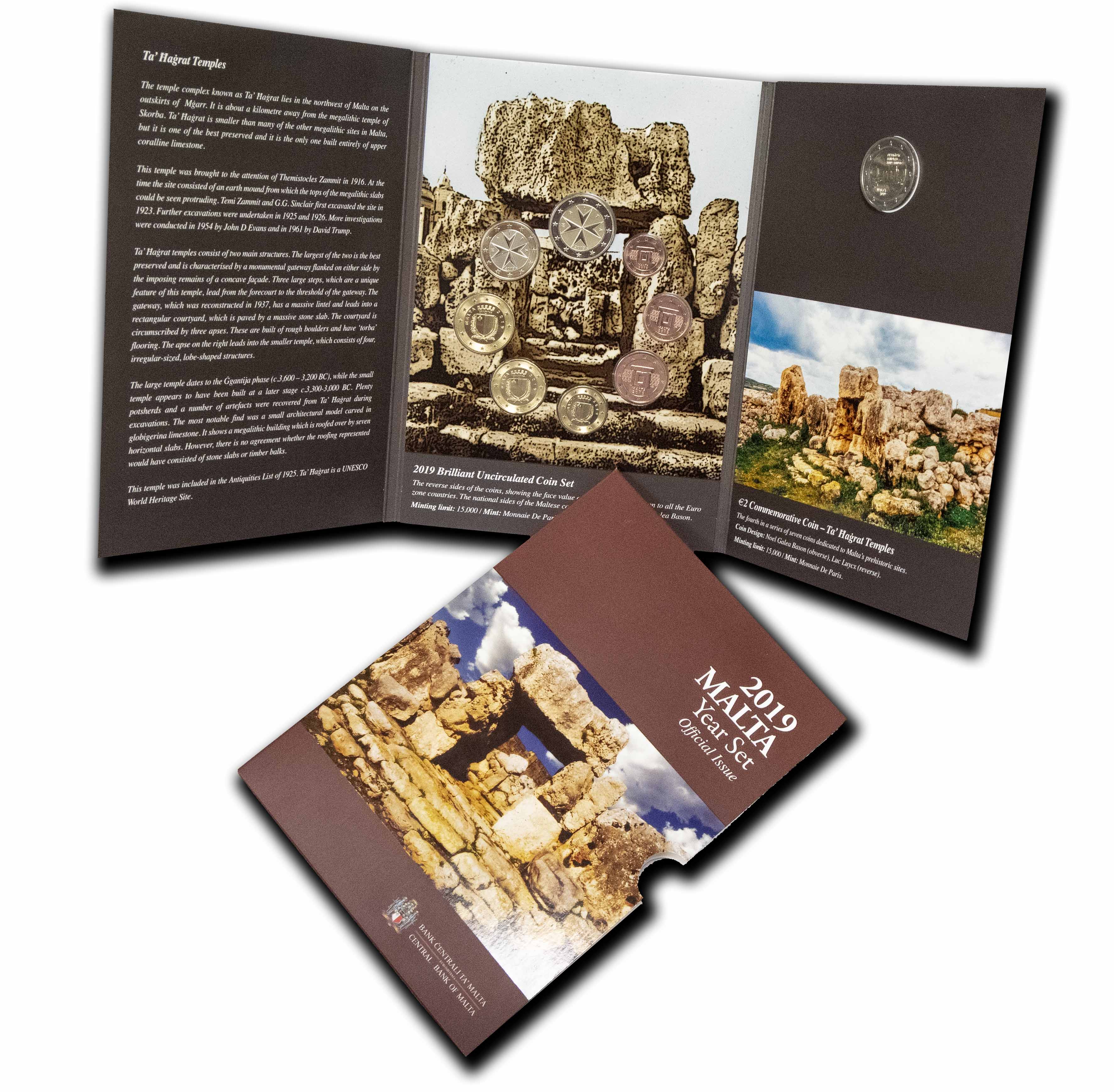 On 13 May 2019 The Central Bank of Malta will be issuing a new euro coin set dated 2019 in a brilliant uncirculated version. The set consists of the eight Maltese euro coins as well as a €2 coin depicting the prehistoric temples of Ta' Hagrat. The latter is the fourth in a series of seven coins dedicated to Maltese prehistoric monuments.

Ta’ Ħaġrat Temple in Mġarr has two main structures. The larger of the two dates to circa 3,600 – 3,200 BC, whilst the other was built at a later stage c.3,300-3,000BC. The site started being excavated in 1923 by Sir Temi Zammit and G.G. Sinclair. The temple’s imposing portal surmounted by a massive lintel and the three large steps leading from the forecourt to the gateway’s threshold are unique features of this temple. Ta’ Ħaġrat is a UNESCO World Heritage Site.

All the coins in the set are in brilliant uncirculated quality and were struck at the Monnaie de Paris in France. The national sides of the euro coins and the commemorative €2 coin were designed by Noel Galea Bason. The sets, which will be limited to 15,000, will be presented in an attractive and illustrated blister-pack.

On 4 June 2019 the Central Bank of Malta will be issuing a silver coin to mark the centenary of the Sette Giugno riots.

The events of 7 June 1919 took place in a colonial setting against the background of economic hardship, massive unemployment and popular demand for self-government. Four demonstrators lost their lives and many were wounded.

The coin, struck at the Royal Dutch Mint, shows the emblem of Malta and the year of issue, 2019, on the obverse. On the reverse the coin carries a representation of a standoff between a crowd and a party of armed soldiers.

The silver replica stamp was also produced for MaltaPost by the Royal Dutch Mint and depicts the €5.59 Sette Giugno centenary postage stamp.

The coins may be purchased from the Malta Coin Centre (MCC) counter at the main building of the Central Bank of Malta, Castille Place, Valletta

All Products - Central Bank of Malta

Coin launched to mark 250th anniversary of University of Malta

To mark the 250th anniversary of its founding in 1769, the University of Malta teamed up with the Central Bank of Malta to issue two commemorative coins.

The coins show the ceremonial crest of the University of Malta including the Latin inscription "Ut Fructificemus Deo", as well as the period being commemorated while the reverse side depicts the Republic of Malta's coat of arms.

Addressing the media during the official launch of the coin, the Rector of the University of Malta, Professor Alfred J. Vella, spoke about the institution's prestigious history and highlighted the role that Pope Clement XIV and Grand Master Pinto had in re-establishing the university as a public institution in 1769 as part of their vision for higher education.

The University of Malta is proud to have been serving the nation for the last 250 years and currently caters for over 11,000 students, including more than a 1,000 international students.

The Governor of the Central Bank of Malta, Dr Mario Vella, said that the Bank was honoured to collaborate with the University of Malta, which it considered to be an important strategic partner.

The issue of this commemorative coin represents merely one facet of the synergy between these institutions, which also covers various educational initiatives. Dr Vella pointed out that he was looking forward to even more ambitious cooperation between the two institutions.

A number of University and Central Bank of Malta officials were present at the launch, along with other distinguished guests.

Information on the coins is available online here.